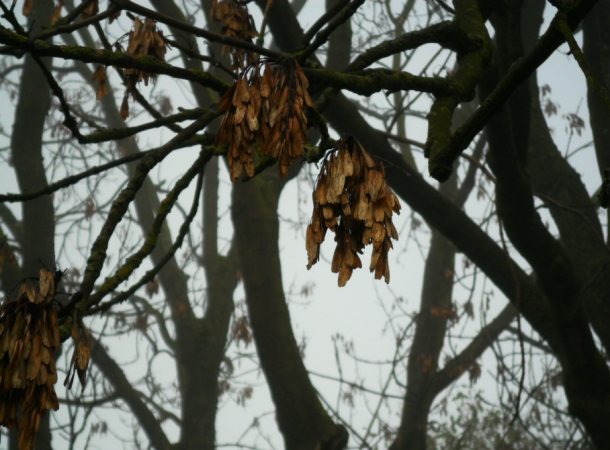 From my poor neglected blog , Happy New Year and have a picture of some dead seeds hanging atmospherically from a tree!

A short admiration post for my short break in the Nith Valley Scotland, no WiFi, no TV ….lots of quiet, wildlife, walking and scrabble.

Three blogs that…..I have been stalking.

Despite having been missing from here for a while doesn’t mean I haven’t been haunting other people’s wonderful blogs.  Something  lovely happened yesterday to prompt me to take keys to screen again.

The first blog I have spent lots of time around is the wonderfully illustrated ziggyshortcrust as she describes herself “elf whisperer, skinnydog wrangler, campervan tootler” how could I not spend time there!   I have long been an admirer of her line drawn elves of many types so when she announced a project to revive the ‘lost art of letter writing’  I practically begged to be included!  After thinking I would have to wait with my nose pressed up against the letterbox for weeks….yesterday I came home to the most perfect rendition of both my Raven and Mage!!

Hope she doesn’t mind but I love them soo much I want to share them here, go and look around her site and maybe claim one of her illustrated letters with elves for yourself. 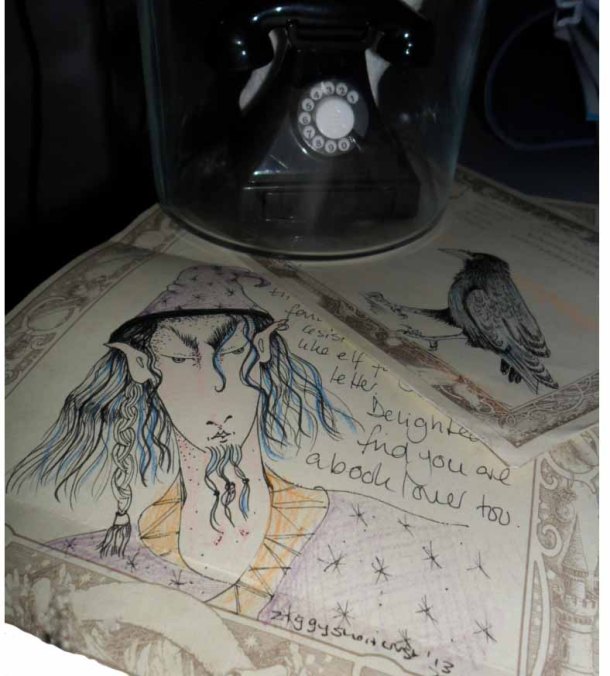 I knew I should’ve been somewhere else these past few days – Roodharigan!

Apparently 1,400 redheads gathered this past weekend at an annual festival celebrating red hair in Breda, Netherlands. Organised since 2005 by the Dutch painter Bart Rouwenhourst, he was inspired by artists like Dante Gabriel Rossetti and Gustav Klimt, known for  famous paintings depicting redheaded women, and the first ‘festival ‘ began after he advertised for models for a series of paintings and many more redheaded women turned up than he expected resulting in a group photo shoot and competition.

The festival this year –  officially known as ‘Roodharigan’ – was attended by red-heads from 52 countries and took over Breda city centre in Grote Market square. The two-day festival is a gathering of people with natural red hair but is also focused on art related to the colour red. Activities during the festival include lectures, workshops, large group photo shoots, fashion shows and strangely women dressing as mermaids in a tribute to the Disney classic The Little Mermaid!

Personally I’d have gone for Merida [Brave] classier costume – and much easier to walk in!

Lovely post from This Sydney Life, stitched book cover designs, and Penguin seemed have chosen some of my favorite books! I have already bought one of these as a gift for a Wizard of Oz loving friend.

Commissioned by award-winning Penguin Art Director Paul Buckley, the Penguin Threads series debuted with cover art by the supremely talented Jillian Tamaki. I was blown away by her exquisitely embroidered classics book-covers and particularly love her Secret Garden cover.

The series now continues with cover art by Rachell Sumpter – beautiful gift-worthy classics. The covers are sketched out in a traditional illustrative manner and then hand-stitched using a needle and thread. The final covers are sculpt embossed for a tactile, textured and beautiful book design. See what you think…

If you’d like to learn more about the Penguin Threads or the Penguin Classics range, you can check out the website here.

Posted in Uncategorized. Bookmark the permalink.

One of my favorite places to wander ‘with Basset’ is the local cemetery as it is pretty old and borders on lots of countryside, the last couple of times I have been there the local crows have been out in force and I have bemoaned the fact that I had no camera with me.  This week camera in hand hoping for some totally cliché shots and there was not a one – restraining the urge to thrash some gladioli and muttering Smiths lyrics I decided  instead to revisit an old love of mine the beautiful carved stonework found on the older gravestones.

So here we have tactile weathered spirals, fronds and flowers, celtic knots and elegant scripts with apologies for my poor photography. 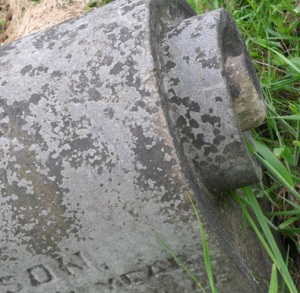 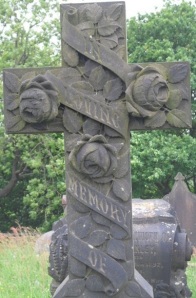 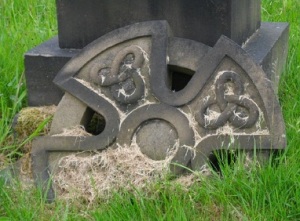 I have found a new {to me} designer to crush on, Tamsin van Essen  a British designer based in London, who specialises in conceptual design. She has recently been using the medium of ceramics to explore scientific and medical themes. Widely exhibited since 2006, her most recent being at RCA in June and July this year with two new upcoming  – Bone  at the Florence Nightingale Museum, London 19 July – 30 Aug 2012, and When I Woke at  Llantarnam Grange Arts Centre, Wales 6 Oct – 17 Nov 2012.

Three of her projects particularly appealed to me.

“This project is about metamorphosis and aesthetic ambiguity: a future rococo paradise where beauty and ornament become sinister and destructive…   Elements of decoration come alive and burst out from the confines of the vase’s form, impinging on the surrounding space. A gothic vision where everything is in flux: the static becomes dynamic; the inert, active; and the everyday, extraordinary.”

Which explores the stigma of diseases, questioning contemporary obsessions with perfection and beauty.

”  I have been manipulating the ceramic material in a way that emulates physiological processes, deliberately encouraging ‘faults’, ‘defects’ and ‘blemishes.’  Based on 17th -18th century apothecary jars, the forms have strong historical and medical links, as well as providing the metaphor of vessel as body: they become containers for disease, rather than holding the cure. As family heirlooms, the jars can be passed down through the generations in the same way as hereditary medical conditions.”

A garniture of beauty and decay

This project is the one which appeals most to me , she has designed a collection   influenced by  17th century dutch vanitas paintings, by using an etching tool to remove material from the slip cast porcelain forms and a sandblaster in its bisqued state, the decoration becomes part of the ceramic structure. during the last kiln firing, areas of the vases begin to peel, representing  and capturing the moment of decay.

All images and quotes © Tamsin van Essen via her website http://www.vanessendesign.com/

It is something about the objects in this project that makes me think of  Miss Havisham, especially in the recent adaptation with Gillian Anderson, the ceramists description of  her work as A garniture of beauty and decay  perfectly evokes how I feel about the image of the ageing bride surrounded by the faded grandeur of her lost dreams.

Or days to be precise….. to celebrate the 150th anniversary of the first telling of Alice’s Adventures in Wonderland the Story Museum is holding a special Alice weekend on the 7th and 8th of July. Based in Oxford their ” Alice Day” is in its 5th year and a special programme of events are to be held for this 150th anniversary including a re-enactment of the Caucus Race on the Sunday.

Go and look at the Story Museums pages for more information about this and also their summer exhibition ‘Tea with Alice’ which runs 28 June – 16 September 2012.  This exhibition reveals the new golden age of Alice illustration – with original illustrations from contemporary artists both published and unpublished.  As someone slightly obsessed with both children’s illustration and the Alice books this is a wealth of new and old ‘eye candy’ !

This wonderful image is from Dusan Kallay, A Slovac illustrator who is one of the artists included, along with the former Children’s Laureate, Anthony Browne two wildly differing styles yet both perfectly capturing the spirit of “Alice” 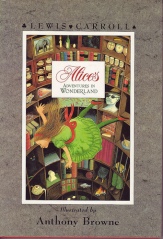 The Story Museum in Oxford – in their own words –   “exists to celebrate children’s stories and to share 1001 enjoyable ways for young people to learn through stories as they grow.We take story performances, exhibitions, activities and ideas to schools and communities. In 2014 we plan to open a magical new centre of children’s literature and storytelling in the heart of Oxford, UK.”

For the first time in the awards history one book has won both the Carnegie Medal and its sister prize for illustration.

More accolades for Patrick Ness’s wonderful book – I have gushed about this book twice before so  just go read this article by Tim Masters, and I will use this opportunity to feature yet another of  Jim Kays haunting illustrations.

caffeinated | by design  recently did a lovely little post with this picture [ comparing swirls – here ] which reminded me of this picture of  Marbled paper {Vintage 19thC } – that I have had saved on Pinterest for ages and had rather poetically described as “like rippled sand on an alien beach” !  Not sure what I was drinking that day. 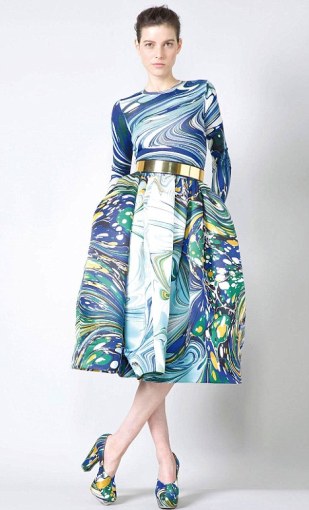 From there we end up here with Stella McCartney because apparently marbling is big news for fashion in 2012.

This skirt is beautiful but I think wearing this trend head to toe would scream fashion victim.